There is no doubt that Himalayas have lured adventurers, mountaineers and cultural enthusiast for many decades. Among all these Mount Everest, remains the premier guided climbing challenge of our time. The Everest Camp II Summit via South is led by a team of highly experienced IFMGA/UIAGM certified Sherpa guides. There is no place on earth, that inspires mountaineers like the sheer scale and height of the Himalaya. For climbers interested in ascending Mount Everest but are not able to join our summit climb, Himalayan Gorilla Adventure presents the opportunity to climb through the Khumbu Icefall to Camp 2, at nearly 21,000 feet. These exciting options allow you to gain high altitude experience as well as, challenging yourself in one of the most remarkable places on earth.

Mount Everest was first summited by Sherpa Tenzing Norgay and Sir Edmond Hillary in 1953 from the South Side. Mount Everest while not posing substantial technical climbing difficulty, does require a high level of climbing proficiency on steep and exposed terrain at high altitude. Everest Camp II Summit climbing begins with exhilarating flight to lukla. We head up to ascend Island Peak, before heading to Everest Base Camp. Island peak is the most popular as it is suitable to all novice climbers as well as veteran trekkers. It is an ideal warm trip which offers spectacular views of Himalayan giants. Like Everest, Lhotse, Makalu, Ama Dablam as well as hundreds of Himalayan peaks.

Many climbers refers to call Camp I [6,000m (19,685ft)] as Valley of Silence. As we’ll be forced to move east across the snowfield to the base of Mt. Nuptse and a small passageway known as “Nuptse Corner.” This is where, the area is marked by huge crevasses, running laterally across the basin, as well as too deep and numerous to cross. The Summit of Everest Camp II [6,400m (21,000ft)] lies at the end of the Western Cwm, and the base of the Lhotse Face. The area is littered with abandoned gear from descending climbers too. Those who, fatigued to carry the equipment home. To climb this steep ice face, we’ll use jumars. Which, are a type of locking carabiner that can free-rise. But then lock onto the rope so the climbers can pull themselves up. We will return to Base Camp and then to lukla via dingboche to catch return flight to Kathmandu.

This camp 1 is situated at the height of 6,400m on plane surface  with a safer mountain walls on other side. This area is warmer, because it is exposed to sunlight during daytime. Whereas, at night grumbling cracking resonate of crevasses beneath our tent can be listened.  After trespassing Camp 1 we arrive at Camp 2.

This camp 2 lies at the toe of Mount Lhotse at the height of 6,750 m. Weather at camp 2 is generally good but sometimes is violent as rolling winds breaches it. Leaving Camp 2 we elevate to Camp 3. After climbing these palaces we reach camp 3.

Camp 3 is located at the bordering wall of Mount Lhotse height of 7,100m. This is where, we use fixed rope, crampons, ice axe with leash and ladder along south Col to reach at Camp 4. As well as we instruct the climbers to use oxygen if necessary. We leave Camp 3 and ascend to camp 4.

Camp 4 is the last camp in our expedition as summit is about 500m from here. Camp 4 is at 8,400m and is dangerous part of climbing as severe weather as well as rolling wind and sheer exhaustion are the probable cases. Late Sir Edmond Hillary and Tenzing Norge Sherpa used this route for the successful summit to Everest in 1953.

Arrive Kathmandu airport. We will pick you up at the airport and transfer you to your hotel. We will stay in the Thamel district of Kathmandu, centrally located close to all amenities. Today can be spent at leisure in Thamel or sightseeing in Kathmandu.

We will be up early and our team will go out and explore Kathmandu. We will run a half day sightseeing tour visiting most of the most important sights in the Kathmandu valley. Free time to spend as you wish in Kathmandu and pick up any last minute items needed for the trip.

Fly to Lukla and trek to Phakding Day 3

Trek from Phakding or Monjo to Namche Bazaar at 3,440m/ 11,286 feet. We will trek along the Dudh Khose River, before crossing the river on many suspension bridges, before making the steep climb into Namche Bazaar. Namche Bazaar is the main trading town for the Sherpa people and a busy market town, frequented by Tibetans selling their wares. We will have 3 nights in Namche Bazaar.

Namche Bazar is the perfect place for the necessary acclimatisation. We take an acclimatisation walk up to the Sherpa Museum at 3,600m/ 11,811 feet before returning to Namche and the Himalayan lodge for Lunch. You can spend the rest of the day relaxing and exploring the town and enjoy the local bakeries and a few games of pool at Cafe Danphe bar.

After breakfast we will make our way up syangboche hill 3,900m/ 12,795 feet. It will take a few hours to reach our summit. You will be treated by some of the best Himalayan views including Ama Dablam,Lhotse, Everest, Thamsurku and so many more. We will spend 30 minutes at this high point before dropping back to the lodge for lunch. Once again we can rest in Namche for the afternoon.

Trek from Namche to Tengboche Day 7

Today we will travel from Namche to Tengboche. We enjoy a walk around the valley, getting views of many of the great Himalayan peaks, including Ama Dablam. Tengbouche has an important monastery in the area, where people congregate for the Mani Rimbdu festival in November every year. We will sleep in Tengboche tonight at 3,867m/ 12,687 feet.

Trek from Tengboche to Dingboche Day 8

After trekking for about an hour, we cross through a dangerous landslide area of the trail, before moving to Pangboche for a tea break. We can enjoy spectacular views of Ama Dablam. We then continue walking up the Imja valley until we reach the picturesque village of Dingboche at 4,410m/ 14,468 feet above sea level.

There is the option to walk to Pheriche 4,200m/ 13,779 feet to attend a seminar on Altitude Sickness run by the Mountain Rescue Association, then return to Dingboche. We will also try and acclimatize up to 5,000m/16,404 feet on the ridge above Dingboche.

Today the team will hike up to Chhukung at 4,700m/ 15,419 feet. We will head deeper into the Imja valley into the shadow of Lhotse. We will do some ladder crossing training. We will also rig up some ropes and do some Jumaring, safety and abseiling training just outside our lodge in Chhukung.

Today we will get up for breakfast and then hike up Chhukung Ri at 5,500m and return to the lodge for lunch. You can relax and make sure all equipment is ready before moving into Island peak base camp the next day. Some items can be left at the lodge and retrieved on return from Island peak.

Rest Day at Base Camp Day 13

Today we will wait until the sun comes up before we get out of the tent. We will have breakfast and then start training. We will rig up a big abseil, along with some training for higher on Island peak. We will spend the morning and afternoon if needed to train and prepare for the climb ahead of us.

From Everest Base Camp today we will go half way into the ice fall and do some training; getting used to crossing ladders and using our equipment in the tricky Khumbu Icefall. After breakfast we will hydrate and rest in base camp. We will pack up tents, equipment, and move our operation to high camp on Island peak at 5,500m/ 18,044 feet

Today we will make our summit attempt on Island Peak 6,189m/ 20,305ft, however, this may be delayed due to weather conditions. This is a long hard climb; initially there is a steep 400m/1,312ft zig-zag rocky scree path with some scrambling, before a scramble and traverse across to a steeper section of rock. This is straight forward trekking, but very strenuous and once you hit 5,900m/ 19,357ft the altitude slows the pace dramatically and the final rock section never seems to end, but once you dig deep, we top out onto a narrow ridge which takes us to the start of the glacier. We get all our gear on, rope up and cross the glacier before the 100m/ 328ft head wall which is fixed by our climbing Sherpa’s, before the tricky final section to the summit. After we enjoy our summit success, we begin the long decent back to high camp. We will rest for a couple of hours before making the journey all the way back to Chhukung.

Trek from Chhukung to Lobuche Day 16

From Chhukung we will have another long day as we head to Lobuche. We will have to be up early to gather gear we left in Chhukung, repack and then head towards the kongma la pass at 5,528m/ 18,136 feet before dropping down the other side towards Lobouche 4,920m/ 16,141 feet. This is a long 8 hour day.

After breakfast we will be on our way from Lobuche to Gorak Shep at 5,180m/ 16,995 feet. This is the site of the 1953 Everest expeditions base camp. Today you get the opportunity to climb Kala Phattar 5,545m/ 18,192 feet for the classic view of Everest. The view off Kala Phattar is truly amazing and place you need to visit. We will stay in Gorak Shep this night.

Today we will leave for Everest Base Camp and start getting used to Everest life on the glacier. You will get into your tent and join the rest of the people looking to climb higher on the mountain.

Today is a rest day. Taking time to clean up and reorganize equipment personal gear and start preparing to go into the ice fall.

Today we will have breakfast before gearing up to head half way into the ice fall. We will cross a few ladders and aim for 5,500m/ 18,044 feet. We will manage this and limit the risk climbing in this area. We will return to Everest base camp and rest up.

Hike from Khumbu Ice Fall to Camp I Day 21

We will head back up the Khumbu Ice Fall to Everest Camp I(6,100m/ 20,013 feet), where we will stay over night camping on the mountain.

After our nights stay at Camp One, we will wake early and head to Mount Everest Camp 2, where we will have an overnight stay at the 6,400m/ 20,997 feet.

Today we will trek up to the base of the legendary Lhotse Face at 6,750m/ 22,145 feet before returning back to Mount Everest Camp 2 for a second night and enjoy the success of climbing high on Mt. Everest.

Return to Everest Base Camp Day 24

From Mount Everest Camp 2 we will return all the way to Everest Base Camp, where we will camp overnight before moving back down the valley

We will head from Dingbouche down to Tengboche to stay the night.

Trek from Tengboche back to Namche Bazaar, where we can spend the evening celebrating our success in cafe Danphe

Today we will have our final day of trekking from Phakding back to Lukla, where we will spend the night awaiting our early morning flight back to Kathmandu

Fly back to Kathmandu from Lukla, and spend the day at leisure in Kathmandu, taking that well deserved shower!

Transfer to Airport for your international flight. 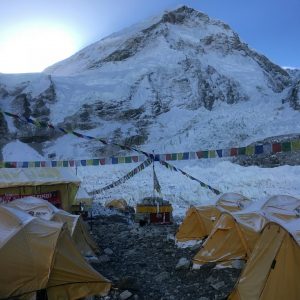 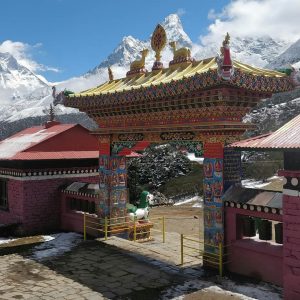 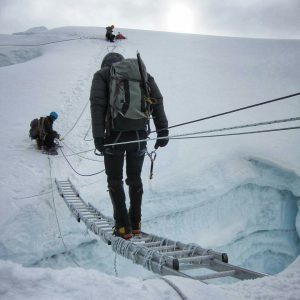 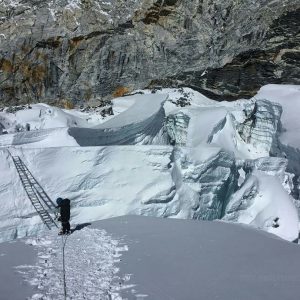 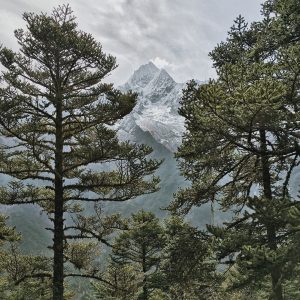 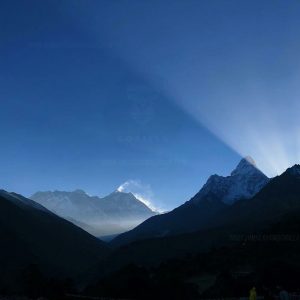 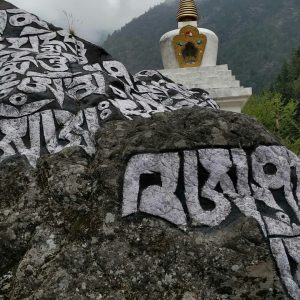 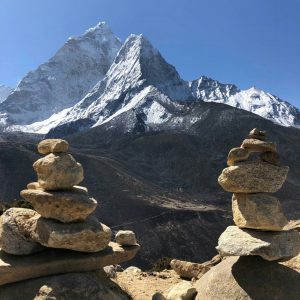 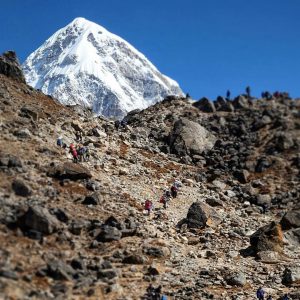 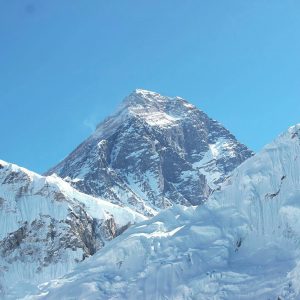 You are booking for Everest Camp II Summit